River on the left 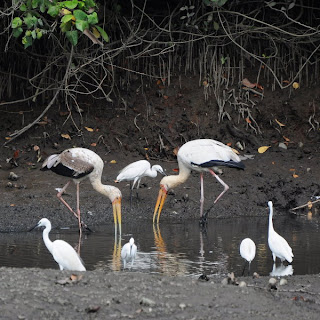 Looking to the left of the bridge, the early dawn just breaking, was an unusual calm of a river at low tide. Stretch the eyes a little further and one could catch a glimpse of a flock of white birds at the far edge of the river bank. These were the egrets waiting for breakfast. They were earlier than the worms.

For those who were wondering why dawn was just breaking at eight in the morning, there was a little story behind this anomaly. The island shifted its official time ahead to be in line with Hongkong which was much further to the East. The normal time for dawn was seven in the past but now technically at eight.

The birds and the worms were not deceived or affected by this artificiality in time.

This stretch of the river is best when the tide is low or just coming in. The egrets and herons will be wading in the low water for their meals. Kingfishers, stockbills and white collars, make this their fising ground too.

Crocodiles too can be seen here without having to venture deep into the reserve. Do not go into the water. Take the warning signs seriously. 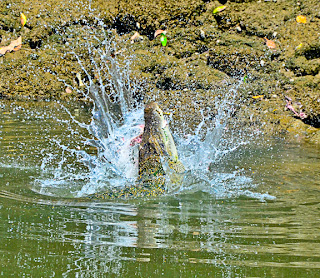 This crocodile just snapped a fish so hard that some of the flesh flew out from its jaws.

These are the grey mullets jumping out of the water while threatened under water. They are regularly seen coming in together with the early tide.
Posted by redbeansg1 at 3:08 PM

Advertisers are welcomed. My email is chinleng@dbsvickers.com

I can do similar blog tours for other places of interest, products or services at very reasonable rates. I can also develop blog catalogs for businesses that need to forward catalogs regularly to customers.

Artists, painters etc may want to store all their works in a blog and use them for marketing/sales purposes.

Blog catalogs are very cost effective and easy to maintain.