These two adult monitor lizards were fully grown. They were huge and massive, nearly 2 metres long. And they gave me a fright of my life after a long and uneventful stroll through the reserve. I was just emerging from the mangrove swamp and walking along the wooden platform. The gap between the platform and ground narrowed till they eventually met. Just as I was near the end of the wooden platform track, out of no where these two monsters appeared and were only 2 metres from me. Though they were on lower ground, the closeness was too much to strike fear in me.

This was what I meant about not taking safety for granted. They feed on small animals. And I have seen little children running way ahead of their parents in the reserve. What if the lizards were hungry and desperate and found the children small enough? This was just my thought. So far so good. But parents, please be careful.

The two dragons of a lizard were encountered next to the field class room in the heart of the reserve. 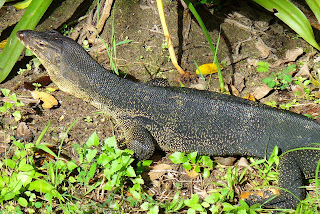 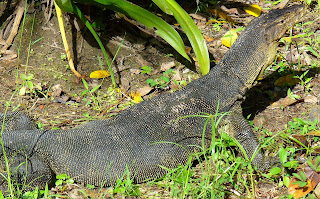 Advertisers are welcomed. My email is chinleng@dbsvickers.com

I can do similar blog tours for other places of interest, products or services at very reasonable rates. I can also develop blog catalogs for businesses that need to forward catalogs regularly to customers.

Artists, painters etc may want to store all their works in a blog and use them for marketing/sales purposes.

Blog catalogs are very cost effective and easy to maintain.